Finding your diary is strange, isn’t it? A mess of unfinished thoughts sprawled across the paper. They can be embarrassing but they can be eye-opening.

Listening to the thoughts of past-tense you, it’s so surreal. It’s like you’re jumping out of the page. The little voice reading you to yourself, but it’s not you. Not anymore.

Finding yourself is a journey, building up the confidence to fight back against your own mind. It takes time. It takes work. It’s exhausting, but it’s worth it.

Don’t let anybody tell you that you don’t have anything to be sad about. It’s not sadness.  It’s much more than that. It’s an imbalance. It’s an illness. But, you will get better.

I had and do have a nice life. A supporting family. Good friends. Holidays. But, I was bullied beyond belief. It was crushing and it was detrimental but it wasn’t my fault.

I didn’t need a doctor to tell me I was depressed. I didn’t need a medical professional to diagnose me a happy pill. Yet, there I was sat nervously waiting for the piece of paper to tell me just that. That paper of clarification. The paper that meant work couldn’t treat me different just because I was sick.

When I refused counselling and pills, I was told to keep a diary. Write it all down. Spill my thoughts and feelings on the paper. Lose myself in the book. Take time to take a walk. They decided I needed time away from work. From the toxic environment. From the toxic person.

It’s scary how somebody can manipulate your life and your feelings, seemingly so easily. They were everywhere. They were in my nightmare. There was no escape. Or, so it seemed.

Once you’re in that spiral. That’s it. Everything is bad. Everybody hates you. Why wouldn’t they? Even you hate you.

So there I was, sat with this new diary, something I was supposed to confide in. I guess it became my new best friend. Late nights were spent scribbling across my diary, and the daytime was for sleeping.

I didn’t know when the nightmare would end. It didn’t seem like it ever would. Nightmares interrupted my sleep and floods of sweat wasn’t uncommon. It felt like it was getting worse. But, maybe it was getting better. I would stare out the window and wonder when it would end. I became increasingly obsessed with my snowglobes. Spending hours tilting them upside down and watching the glitter settle.

It wasn’t sadness. It didn’t feel like sadness. It was much more than that. I was a hollow shell. A shell of my previous self. I had to go back to work. My time out was over. It was just as bad as I had pre-empted it. Everything was made to be my fault, and they made my life hell. They made me feel like I wasn’t good at my job. That I was a bad person, and I believed it.

“His eyes gazed through the window and met mine. I’m fixated on him. A strand of blond hair falls onto his face. Then he was gone.” – 2014

Then, the place halted. A new face appeared. It’s funny how somewhere that felt like hell shifted. I didn’t see blond hair boy for a while. I didn’t care much to find out. I was eating less and less. I had my own problems going on. He wouldn’t want me anyway. There was no point.

So, I got some flowers. I watered it. I kept going because my flowers needed me. Then, a lovely colleague bought me a plant. A plant I needed to take care of. A plant that sits on my windowsill even now. If a plant can bloom after a long winter, so could I. 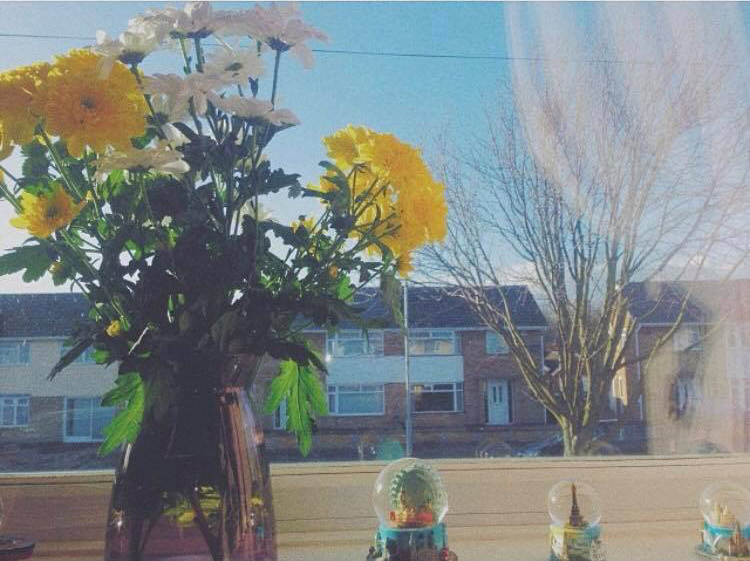 It’s scary how so many people can tell you how good you are, how lovely you are, how pretty you are, how funny you are. Yet it takes one person to tear all that down. Somebody who shouldn’t have even mattered to me. Somebody I haven’t thought about until I found my diary, but somebody who consumed my life. I was obsessed with them. Replaying every little remark, every eye-roll, every complaint. There was no way out. I had never been so hated. Yet, I hadn’t deserved it. I know that now.

“And somewhere amongst the bustle of London, I found myself at my calmest with you.” – 2014

The blond did care. The blond still cares. London, the diary and the blond became my saviours. The ones I knew I needed. He became the one I needed. The one who learnt to sit in the corner with me as I was in tears. The one who sat with me in the car at lunchtime because the thought of being anywhere else petrified me. The one who told me I was strong enough until I believed it.

Four years. That’s all. Four years it took me to become that ‘one-day’ person. Engaged, puppy, overlooking the sea. I had the strength. I walked away. I won. The battle was long. It was draining. I learnt. I grew. There were tears, there were screams and pain. But, I won. I made it out.

So, I raise my  tea to you. You broke me. But, I fixed myself. Here’s to you because forgiveness is the right thing to do.

You can do it. Progression is slow and painful. Then suddenly, all at once, it’s four years and you’re doing it. Don’t give up. This is just the beginning. Stick around, it’s worth it.

Although I opted for a no drug recovery, this is only my personal experience. My doctor was confident that I would be fine being monitored without drugs. I had already confided in family members so I was being watched.

If you or anybody you know is affected by mental health, please seek medical help.

3 thoughts on “My Journey”

It would be rude not to in this weather ☀️😌
Made it back to Benidorm just in time for summer. 👀😆
First cinema experience ✅
the absolute epitome of a ‘picture-postcard’ village.
Baby on @brittanyferries? Completed it ✅
Vilaboa is a small town belonging to the Pontevedra region in Galicia, Spain. It’s a place reminiscent to us of the Italian lakes and Switzerland. Here you can enjoy mountains, viewpoints, beaches, historic ruins and salt flats.