As you may or may not know, May is the time when Benidorm is really alive (see what I did there?). It’s summer, but not yet summer.

Events start happening, people start returning and there is a spark of good vibes that hit the city.

The admins of Benidorm & Costa Blanca News & Information Forum have also returned and, of course, they have returned to Rio Park.

Something else has returned. The sun and the heat! Which means, my diet now consists of ice cream, gelato, coffee with ice cream, chicken pasta and water. Okay, maybe I will still eat sausage casserole and curry… the beach will get the body I give it!

Ferretti Gelato e Caffe is actually a huge chain, originated in Panama. However, unless you head to South America, you can’t try this amazing gelato outside of Spain.

Good news, if you’re heading to Spain, there is more than likely one where you’re heading. Though they seem pretty prestige right now. Even Barcelona and Malaga doesn’t have one. Yet.

If you’re coming to Benidorm, there is only one. The next nearest is in Torrevieja and Murcia, a bit of a drive for a gelato! The one in Benidorm is located on the first line of the Poniente beach:

Keep in mind where abouts this Gelato was bought. Something will surprise you later on.

When I visited Leicester I was given a mini crash course on gelatos, courtesy of Gelato Village. Let me just say this, ice cream and gelato are not the same. Gelato was created in Italy whilst ice cream was made in America, now, I trust Italian food. Pasta. Pizza. Wine. They’re doing it right. So, let’s face it, they must be doing that cold treat better!

Here’s my favourite part: Gelato is healthier for you than ice cream. Guilt-free gelato eating every day on the beach has my name on it. I think my little brother will enjoy a bowl or two in summer! 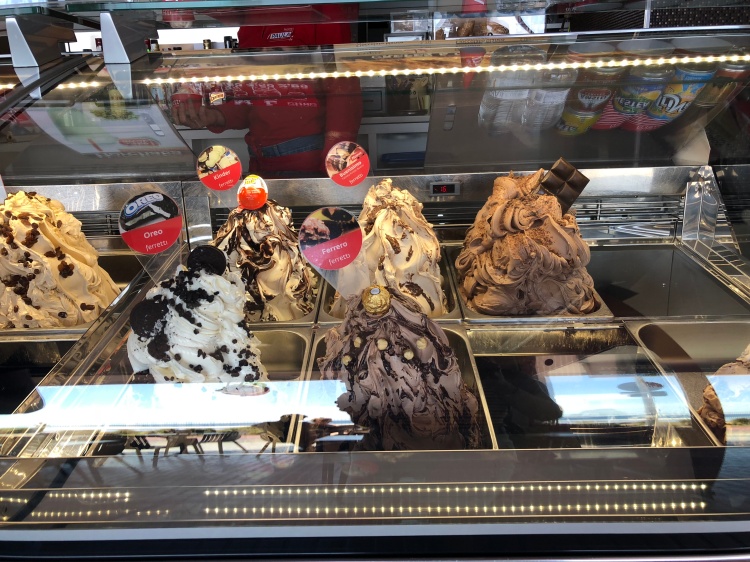 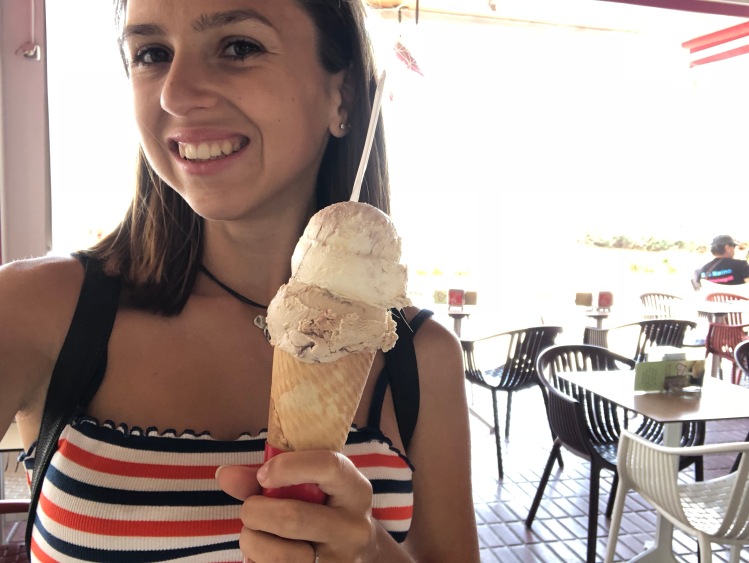 The gelato was incredible. Smooth and creamy it made for a lovely pre-summer cooler. I’m glad we found Ferretti this side of summer, and not at the end of summer! Though, our bank balance might not agree…

But, a medium cone or bowl with two scoops is only €3.50. Pretty good when you consider the size and quality. Especially, if you compare it to one ice cream from a corner shop costing anywhere between €2.50 and €4. (Even worse when they would have bought the multipack from Carrefour for around €3 for a pack of 5. But that’s a story for another day!)

You can also get Italian coffees, pancakes and more! Yummy!

From the 11th to the 13th May, Benidorm took a dive back to the Middle Ages and welcomed back the Medieval Market.

The Medieval Market was set up along the Paseo del Parque de Elche or Dove park.

Packed with stalls, parades, processions, entertainment and more. All of the stall owners were dressed in costume adding to the authenticity. Smells of goat cheese and BBQ filled the air.

We walked through as the Medieval Market was just closing for lunch, which was a shame. But, what we did see was great!

The Medieval Market was a big hit, I am definitely making sure I attend during the peak of it next year!

I recently spoke to Paul from Derry about his experience at the Medieval Market. He pointed out how fabulous the toys were and that it was ‘nice to see handcrafted toys that are for autistic children’. How refreshing to hear! Well done, Medieval Market!

“My wife and I went to the medieval market recently. Some nice hand crafted gifts. Also nice to see hand crafted toys that are for autistic children. Also the food stalls were amazing.” – Paul from Derry in Northern Ireland

Remember where we got the Gelato from? Gelato melts slower than ice cream so you don’t end up with a splodge on the floor, or worse, sticky hands! Yes, this gelato lasted me from Poniente, well into the Levante area! 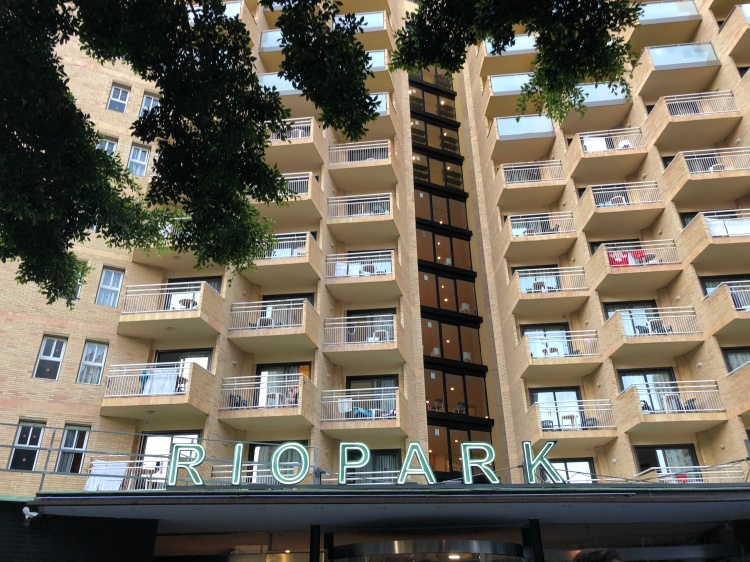 The Rio Park is a highly recommended hotel in Benidorm. Located on the ‘Yellow Brick Road’. It’s in a perfect location for getting to the nightlife, the beach but being tucked away that it isn’t overwhelmed by it all.

The Rio Park has games rooms, a bar, outdoor and indoor entertainment and a spacious reception. The visitors rave about the great entertainment that is on every night at the hotel.

We met with Jacqui and Carl, the admins of Benidorm & Costa Blanca News & Information Forum and their partners for dinner.

Locals: If you want an instant fix like you’re on holiday. For €11 you can enjoy the buffet food and 2 drinks, one from the restaurant and one upstairs in the bar. This also includes the option to enjoy the night time entertainment.

Holidaymakers: The Rio Park has a wide range of food and even a kids food corner. The food was well stocked and tasted great. You won’t be going hungry whilst you’re here!

Rio Park is a big favourite, but you don’t have to take my word for it. I caught up with some of the past and present guests of Rio Park for their opinion.

Anabels from Spain shared a mouth-watering photo of her “fab Strawberry G&T in The Rio Park” when she visited recently.

Denis from Wales said “Rio Park, I love this hotel”

What fantastic reviews for The Rio Park hotel. The staff should be very proud of themselves!

The Rio Park has also kindly allowed the group to meet up in their conference room which is nicely decorated so the group will always have somewhere to catch up, don’t forget to get your Mr & Mrs Smiley and take advantage of the fabulous offers that come with it!

We took a walk back from the Rio Park Hotel to the bus stop around 21:00, and, it was still light! From the photos, you would think it is the middle of the day!

Have you visited the Rio Park Hotel? Did you manage to see the Medieval Market on its visit? It’s amazing what you can fit in on a Sunday!