This week, we’re in The New Forest, UK! I’ve teamed up with Emma from lifeofemmax to bring you the similarities and the differences between living in Alicante, Spain and The New Forest, England.

Don’t forget to read Emma’s Post to get all of the information about how Emma’s day went!

This week, it’s a little different. I start off in Alicante and arrive in Leicester, UK. It’s almost like a three-way comparison! Find out about my treacherous journey filled with surprises, my Fosse Full of your Favourites campaign and how my day went!

I awake sharply, stunned by my own nightmare. One that makes an appearance every so often yet keeps me thinking about it for the next week or so. In a daze, I check my alarm. 2:27a.m. I have another 45 minutes before my alarm will ring. I’m on two hours sleep. Today is going to be a long day.
The sounds of Rio snoring are echoing around the room. For a dog so little, he snores so loud. He’s stretched out on the end of the bed, he looks comfortable.
I drift back off to sleep shortly after, though not for long…
My alarm buzzes at 3:15 and I awake at the first ring. I’m wide awake. Alex less so. I’m dashing around the apartment finding a change of clothes because I suddenly don’t feel like wearing a t-shirt and skirt to travel in at 4a.m, I’m rushing around trying to find my keys that I remembered I hadn’t packed. Why do I save things for the last minute? 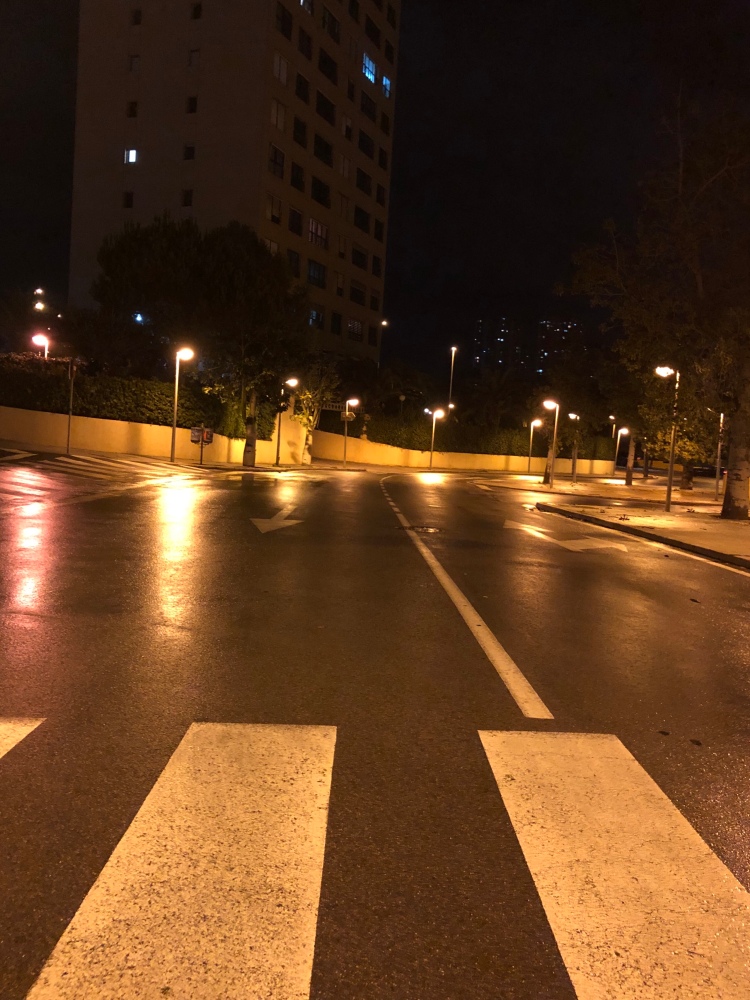 The streets are deserted at this time of night, the waves seem to crash along the shoreline. The wind whispers between the apartment blocks. There’s not a soul around. a faint sound of music travels through the air, gently arriving like a whisper from Benidorm, a reminder that this is a contrast to what is happening in the centre.

The bus arrives and as always, the driver says hello to Rio. What feels like thousands are eyes glare out of the window and watch you get on. There are faint sounds of “he’s so cute” and “look, he’s waving!”. I assume they’re talking about Rio, as opposed to Alex, but then again, who knows!
The bus is 13€ return, so it’s ridiculously cheap. The journey takes 45 minutes and the lights are dimmed. I try to drift off to sleep, until my phone pings.

“We’ve found this little fella. I don’t know what to do.”

Then there’s a photo attached, a cute little dog looking sad on the street. Alex is like me. He cares about people. He wants to do something.
It’s 4:10a.m and I’m trailing through all of the lost dogs’ sites, perros perdidos, anything to try and locate the dogs’ owner. 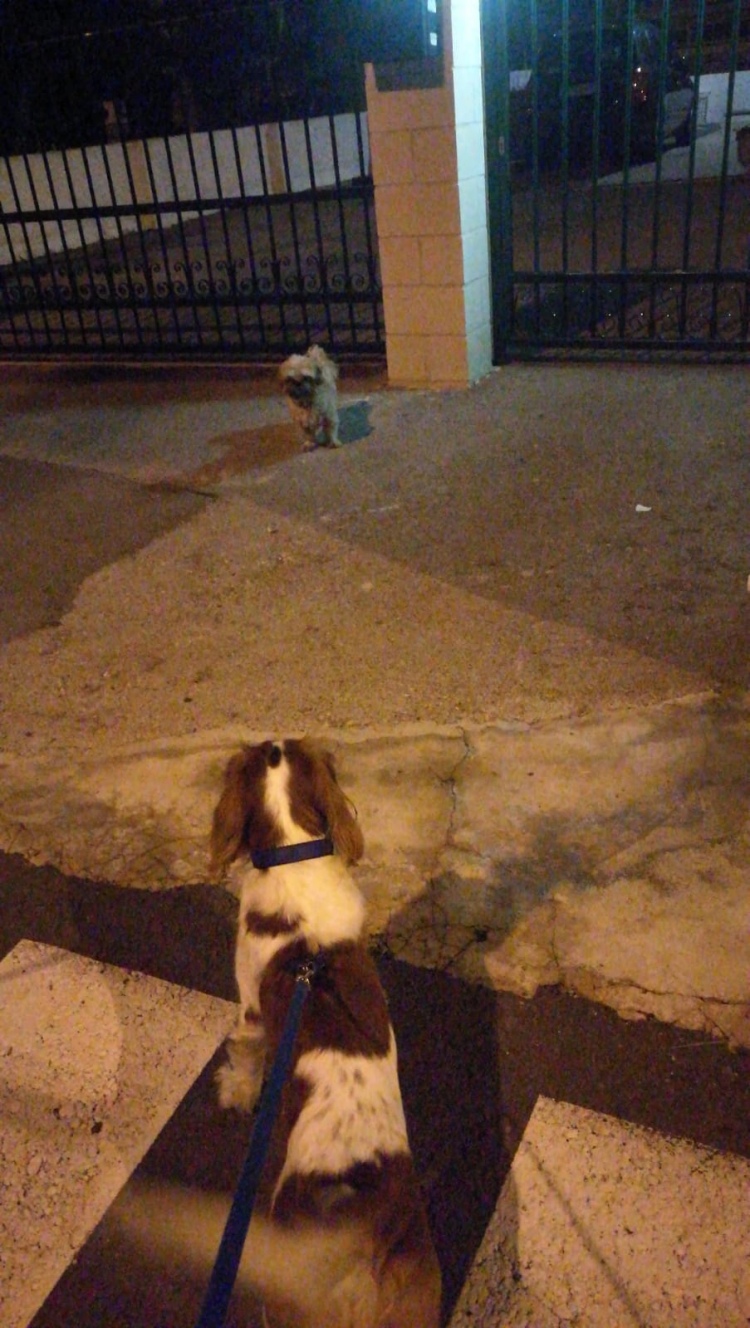 Meanwhile, I arrive at Alicante airport and begin arranging my things. There isn’t a lot of time to hang about after waiting in the line for bag drop. The new Ryanair system is so much better. There’s no wandering around the airport with a suitcase. It was so easy just getting on the plane with my handbag. No having to get out my liquids. Plus, you can take full-size liquids in your case now! As long as it’s in the hold.

I head to Starbucks and have the Christmas hot chocolate. Today is a Christmas themed day, so I need to get into the spirit. A coffee in my local cafe is 1,60€, the small coffee in Starbucks was 5€. Incredible.

Shortly after, my plane starts to board and my phone pings again.

“I pressed all the buttons and his owner came down.”

Alex had stayed with the dog until 6:00, putting him on Rio’s lead and let the dog lead him to his apartment. The owner came down and they were reunited. They had been looking for him for some hours. The owner was fairly old and told the dog off, she didn’t thank Alex, but I think in times like these, we forget about what somebody has done for us and more in shock. I like to think she’s grateful for what he did.
The flight was fine. I sat next to possibly the worst person on the plane. Constantly putting his feet in my leg room, and shaking me to wake up every time I fell asleep. Even though I was leaning the other way. Conveniently, every time I fell asleep, he or his wife had a reason to get out of their chairs. So, shaking and “get up then.” was, of course, the only possible thing to do. Why do these people find me on a plane? 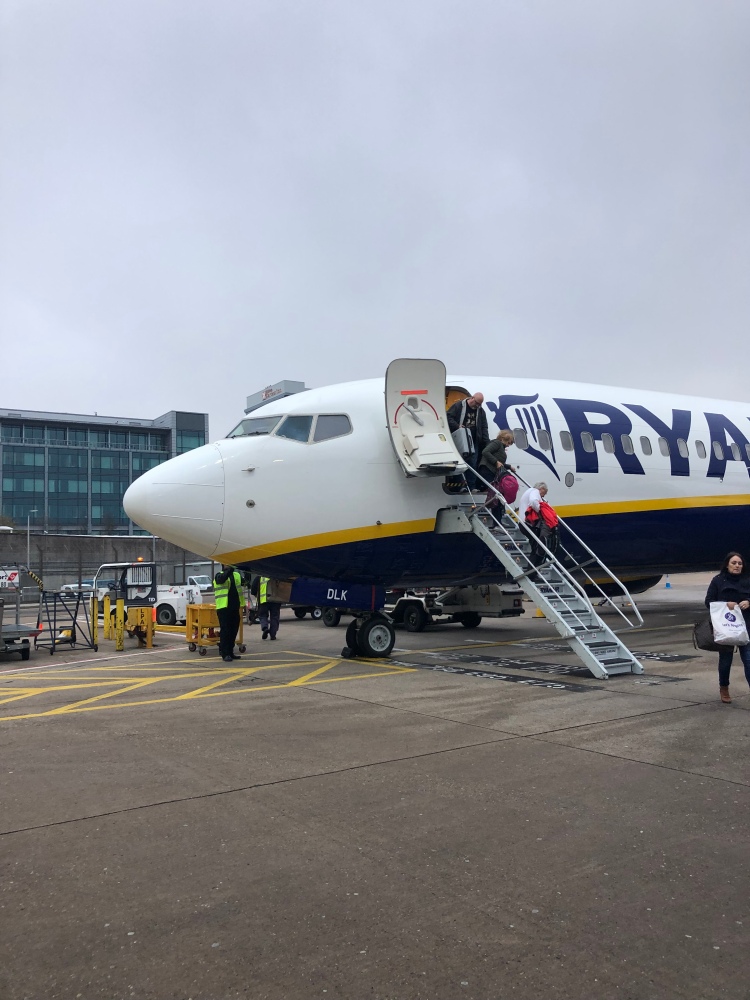 I land at Birmingham and make myself sound stupid. Amazing.
I get to customs.

The traffic in the Midlands is crazy. There has been a huge accident. I linger around the airport playing Clash Royale. I love that EU roaming means I can still use my phone as normal.
After a treacherous journey, I arrive home. Marley goes wild. His tail wags. He jumps up and down. There’s no time to hang around though, the traffic isn’t moving and I’ve got to get to Fosse for the Full of your Favourites Christmas Campaign. 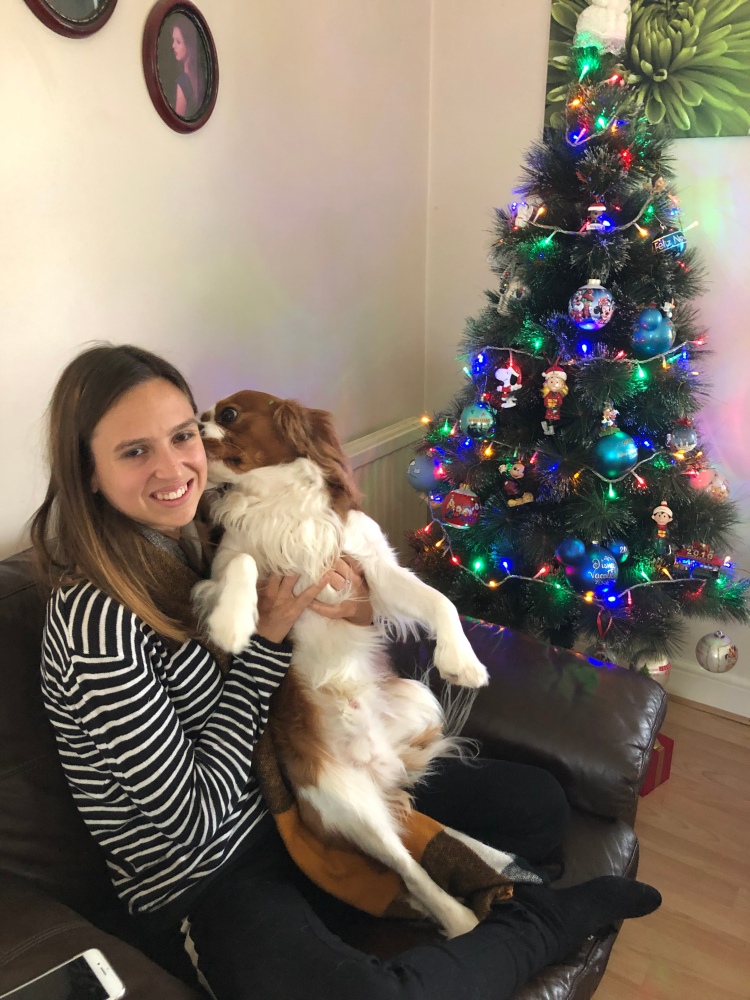 We get to Fosse after crazy traffic. Everywhere was bumper to bumper. Insane. The weather is cold, but nothing too bad. It was quite nice to feel the wintry air and see the grey sky, it was a change from the constant blue!

We get our hands on the Christmas Full of your Favourites advent calendars from Fosse and proceed to have some photos taken by Will, the photographer. It was so fun getting into full cheese mood! Well, I do a love a little cheese at …all the time… 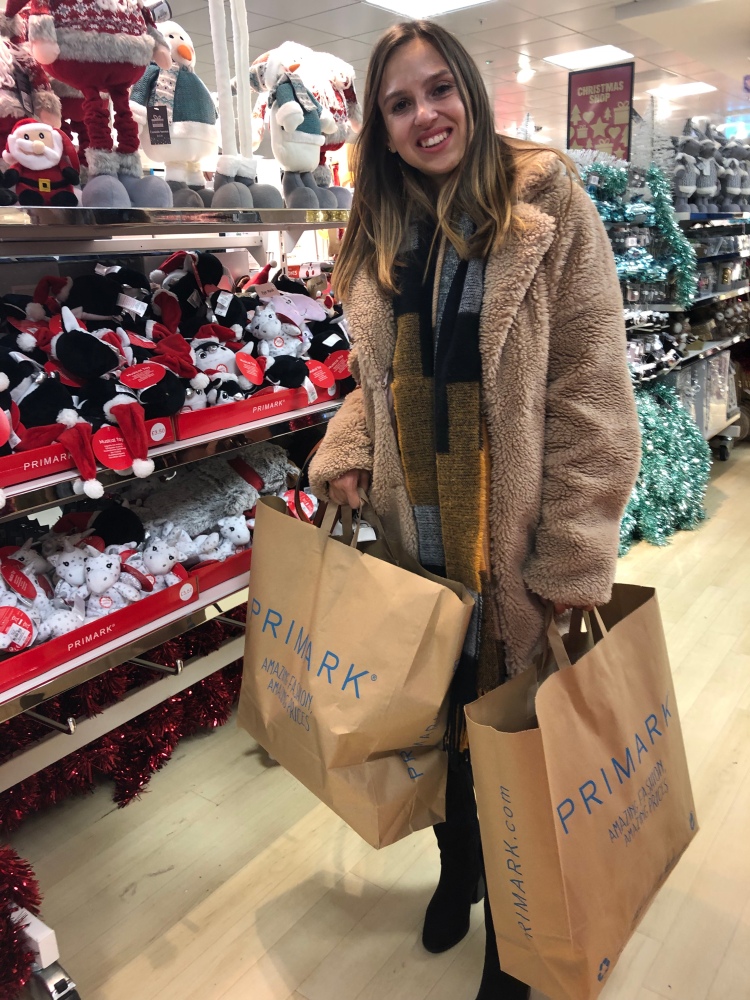 I wander around Fosse doing some Christmas shopping, I’m feeling very lucky to be able to pick out lots of different bits and pieces for my family, and a few treats for myself! I have been wanting the Yankee Candle Christmas Calendar and some new socks so I was able to treat myself to those! Primark is so good for socks, £2.50 for packs of 5 Disney socks. Amazing! 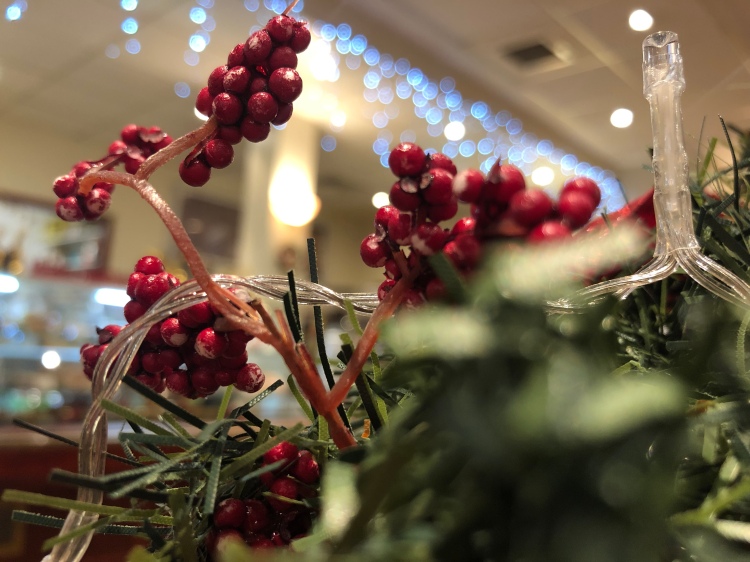 We stop for a cake and coffee in Druckers in the Food court. It’s such a nice place to sit and relax. The Christmas decorations look stunning too. I can’t believe October was the first time I went in there! It’s 100% worth a visit! 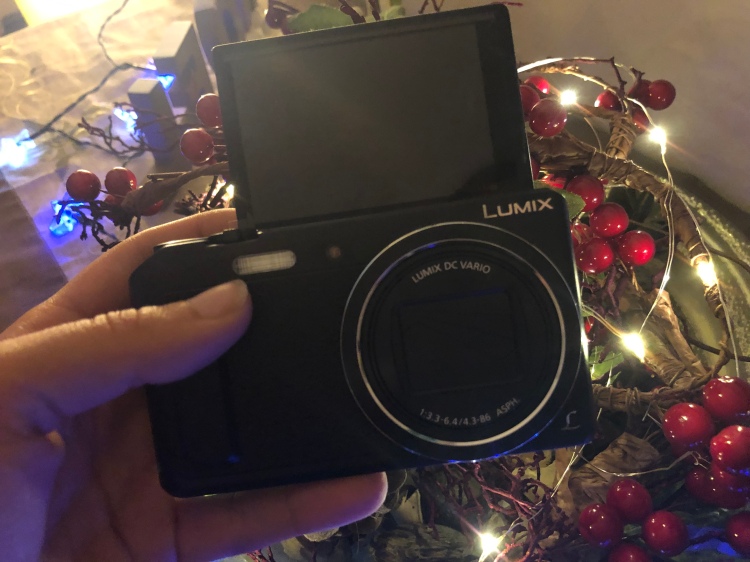 I head over to Curry’s to pick up my shiny new camera. I am so excited! It’s a Panasonic Lumix, after the recommendation from Romi!

It was a huge saving for Black Friday, down from £179 to £129! I’m excited to have a camera that doesn’t weigh a lot, but takes high-quality photos and videos! The staff in Curry’s were really helpful and really friendly, which makes all the difference too. Especially me, who had no idea what kind of memory card I needed!

After a 6 hour shop, and an eyebrow waxing appointment finished. We head back home. The traffic has lifted now and the journey took a tenth of the time than it did getting there! Marley is stalking out of the window and his tail wags happily when he sees me. 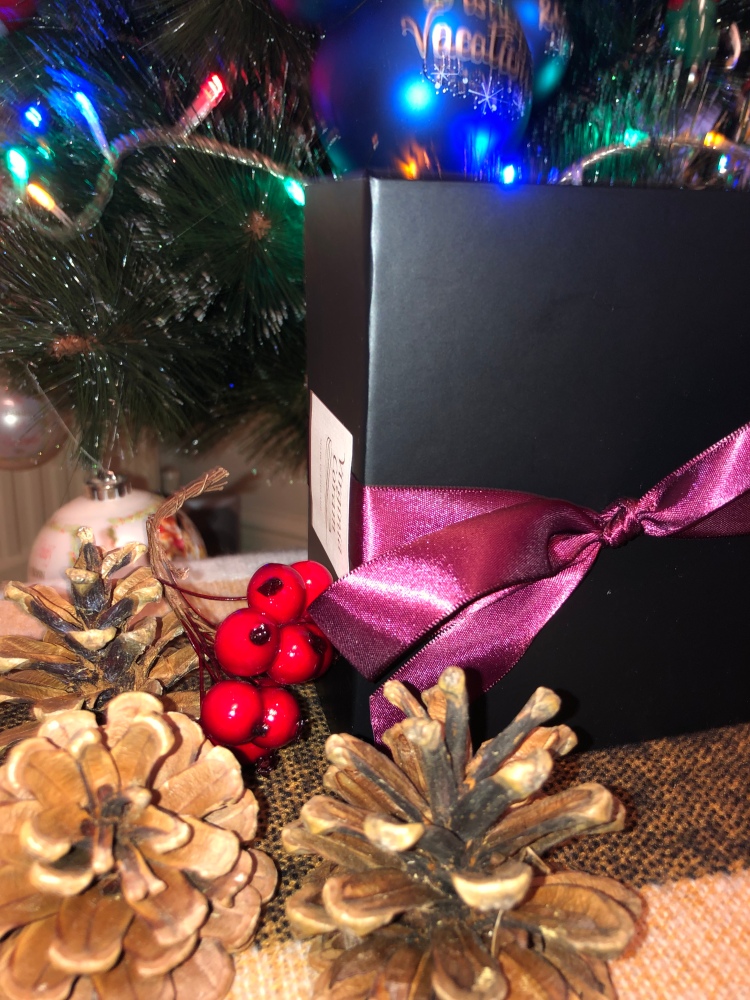 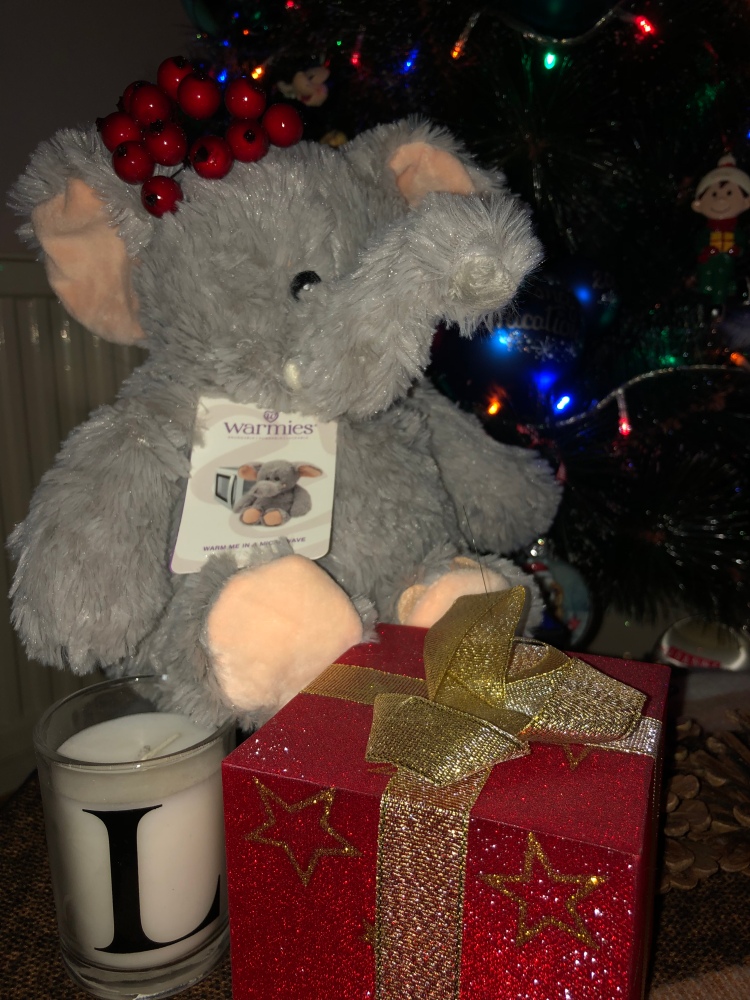 I go through all of the packages that are piled high in my bedroom. Hot water bottles, toiletries, travel equipment, candles, gifts, chocolate. There is so much to go through and take photos of. I spend a good 5 hours videoing the unboxing and taking photos. The darkness has settled in so it’s getting harder and harder.

After dinner, we portion out the cake from bakerdays. It’s a letterbox cake that gets delivered to your door. It was a beautifully presented cake with different languages saying Merry Christmas, very fitting for a language lover like me!

We snack on some Popcorn Shed “Say Cheese” popcorn whilst watching a Christmas movie until I can’t stay awake any longer.

Rich with cultural heritage lying on the outskirts of Southampton, The New Forest is filled with history, both factual and a little spooky. The land of William the Conqueror and his ‘Nova Foresta’, to the smuggling crimes along the coastline. The New Forest is an interesting spot to research and one that has me craving to visit.

The history of New Forest is intriguing even to those who aren’t passionate or massively interested in history. It’s one of those places that has you craving for more information when you start to research.

Founded in 1079, The New Forest is certainly nothing new. Compared to our booming little fishing village that only started to grow in the 70s. I mean, we could always compare the New Town of Benidorm and the New Forest as a somewhat slight comparison.

Contrary to what I thought I knew, the New Forest is not actually all Forest. There are large open spaces of heath, bog, grassland and ancient woodland. It’s like something you’d read in a fairytale book. Living amongst the local people, you’ll find donkeys, cattle, pigs and sheep which graze freely in the New Forest. It’s unbelievable to compare the small farm that we have that lies on the edge of the city and up in the mountains. Although filled with similar animals, I can’t help but think they have a much better and rich lifestyle in the New Forest compared to the burning heat of summer here with little to no grassland to live on.

The New Forest was an important location in the First World War, wounded soldiers were brought and treated in make-shift hospitals that were set up by the locals. Its location on the edge of Britain on the south coast meant it was a crucial location for British, Commonwealth, US and Canadian troops in World War 2 as well. Across The New Forest, there are still remnants and evidence of the WW2, which played a major role in the D-Day operations.

Although a million miles away from the action of the wars, Benidorm paid homage recently to the efforts made by soldiers in the WW2 by recreating the action on the Poniente beach. The dramatic beach landing was quite a contrast to the usually Ryanair plane landings, with around 50,000 visitors marvelling at it. The D-Day recreation was at the end of September and featured a musical show, costumes and lights. The reinactment show of World War 2 in Benidorm was a spectacular and colourful event that paid homage to the fights that took place on the Normandy coastline.

I can’t compare with England without comparing the weather, can I? What more do we love to talk about than a good weather update? The weather in The New Forest was a chilling, but dry 12 degrees, whilst the weather in Benidorm was a slightly more welcoming 18 degrees. It’s funny that I wore the same clothes in both places, yet didn’t feel colder being in England. That was until I landed in Spain on Sunday 25th and felt the heat meet me!

Next time, we’ll be comparing the similarities and differences between living in Alicante, Spain and Frankfurt, Germany.

Want to know all about life in Frankfurt? Well, stay tuned because next time, I’ll be teaming up with Molly from Miss Molly TV to bring you A Day in the Life in Frankfurt compared to Alicante, Spain.

Make sure you’re subscribed to my blog so you don’t miss an episode!

If you want to be a part of this exciting series then please feel free to fill in the contact form below. I look forward to hearing from you!

If you want to sponsor this blog series or any of the blog posts, please contact me via my Contact page.