Christmas Eve is one of the most exciting times of the year for children across the world. In one sense, Christmas Eve is more exciting than Christmas Day, even for us adults. But why is that? Is it the memorable Christmas Eve traditions? The excitement for what’s coming tomorrow? Or, is it just the thought that tomorrow is Christmas?

It’s almost like once you’ve opened the gifts, you’ve had your dinner, you’re just left with a room full of Christmas stuff that just doesn’t seem to fit anymore. It’s over for another year. Though, of course, in Spain, we have to hang around for King’s Day, so the trimmings have to wait a little while longer.

Christmas Eve is a time for reflection and celebration. Most people in Spain will head for a Midnight Mass, known as “La Misa Del Gallo” which actually translates to The Mass of the Rooster. It’s called this due to the story that a rooster crowed the night that Jesus was born in the stable. Christmas Eve is a religious day for the Spanish, known as “Nochebuena” meaning “The Good Night”, it’s a time to recognise the nativity and the true meaning of Christmas.

In the days leading up to Christmas Eve, and Christmas Eve itself, some children will take part in “piden el aguinaldo” which is exactly the same as carol singing. Usually, you will see the carol singing taking place in local parks.

On Christmas Eve, families will eat their main Christmas meal on Christmas Eve, before the service or straight after. Typically, this includes “Pavo Trufado de Navidad“, which is turkey stuffed with mushroom truffles.  There will also be a variety of seafood, including prawns, shellfish, molluscs, lobster and crabs. It’s a real showstopping event.

Desserts can be anything from mazapán, which is marzipan with almonds, turrón, which is a sweetened rectangular nougat or polvorones, which is a traditional Spanish style of shortbread.

Sometimes, you may find people walking the streets late into the night playing music, celebrating their way into Christmas Day. Funnily enough, there is a saying in Spain, “Esta noche es nocheBUENA, no es noche de dormir“, which means “Tonight, it’s the good night, not the night to sleep”.

In Spain, there are a few dialects spoken, in Valencian and Catalan, Merry Christmas is “Bon Nadal”, whereas in Castellano it’s “Feliz Navidad”.

Have you ever noticed that you get all dressed up on Christmas Day for absolutely no reason except to walk around the house dressed to the nines?!

More recently, we have started getting a Christmas Eve Yankee Candle to light on Christmas Eve, now that we don’t put out wine and cookies for Santa.

I also love the Christmas Eve box tradition so that will be a tradition that we adopt in the future. We, okay I, usually have already wrapped all of our presents and they’re already under the tree. But, there are sometimes a few extra gifts I can’t resist, so Christmas Eve is those last minute touches before Christmas, you can’t forget the Christmas tunes, right?

It’s getting colder here but, it’s still nice enough to wear just a jumper in the day. Or, a t-shirt if you’ve come from the arctic temperatures in England! Christmas is all wrapped up, the presents are looking lovely wrapped and placed below the Christmas Tree where the lights are twinkling gently. Santa is hanging over the balcony. Christmas is on its way.

Red Starbucks cups seem to be a huge thing once Christmas comes around, and I too was once majorly into the hype. There is a way to get into the Starbucks Christmas spirit without having to keep adding to so much waste. I always get my red Starbucks mug out during the Christmas period. The red mugs are here to be used over and over again. 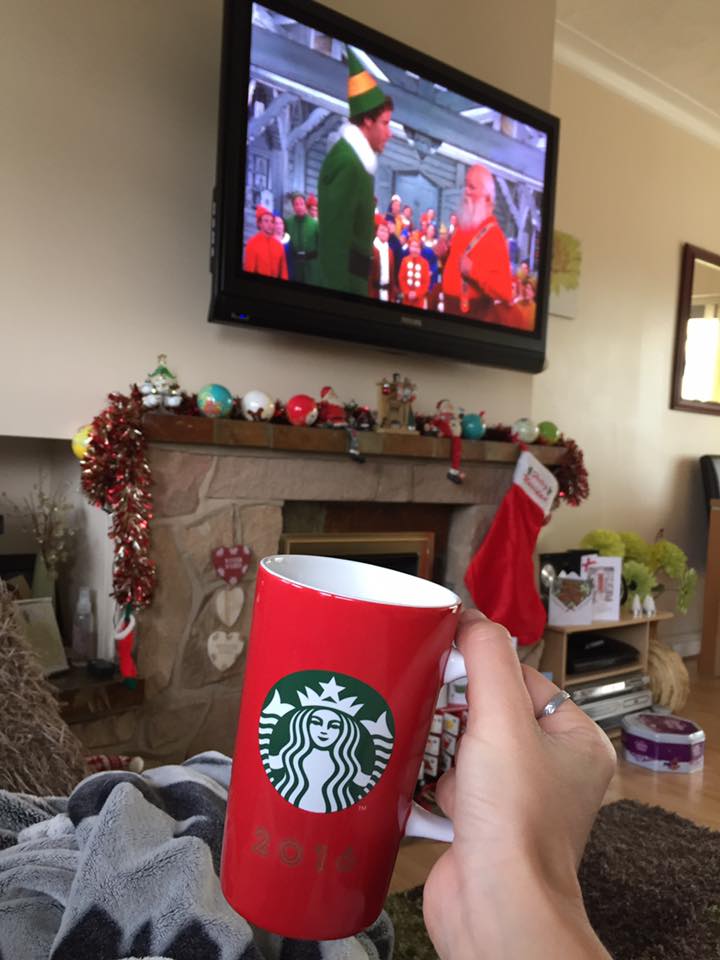 I just want to take this time to say thank you to everybody that has followed along with my blog, people that have read what we’re up to, or taken an interest in life in Benidorm and Spain over the Christmas period. Thank you to those who support this little hobby of mine, I’m glad that it helps. Thank you to those who have met up with us this year and thank you to those that continue to send me lovely messages every time I post a blog, you all make the hard work worth the sweat and tears that sometimes go into writing these posts.

Also, a huge thank you to the PR’s and companies who trust in my blog as a space to send their products that align with you guys. The companies that reach out and let me share some of my favourite things with you all, without having to reach into my purse to do so. I am forever grateful for those opportunities that allow me to work on a mutually beneficial basis. It’s nice to have a little reward, especially around the Christmas period.

If you’re alone in Benidorm and don’t want to be, there are plenty of bars for you to go to and you will be welcomed with open arms, a lot of bars will be open, as will cafe’s along the seafront.

I hope you all have an enjoyable, restful, joyous and Merry Christmas.

Seven months (and a day) of learning your likes and dislikes. Learning what makes you laugh and smile. Seven months of watching you learn, develop and grow. Seven months of seeing you slot perfectly into our jigsaw of a life like the missing piece we never know wasn’t there. Seven months of seeing Rio become more and more protective of you with each passing day. Seven months of seeing how everyone who meets you adores you. Seven months of laughter, tears, cuddles, kisses, mess, toys, experiences, holidays and everything else in between. You’re 20cm bigger than when you were born and our hearts are 100% more full. You’re the best Inés ❤️
One of my most favourite places to take a photo here. A beautiful morning walk along the poniente beachfront listening to the waves kiss the sand. Early mornings like these are ones I’m most grateful for. 💙
water play… without the mess 😆
and these moments become memories that we’ll never forget ❤️
Inés has entered a stage where she is very clingy to me. She cries when I leave the room. She’s not about not being able to see me. Which is very lovely but very exhausting. She’s the happiest little soul as long as she can see mummy so moments like this where I can take a breather are bliss 😅
It would be rude not to in this weather ☀️😌